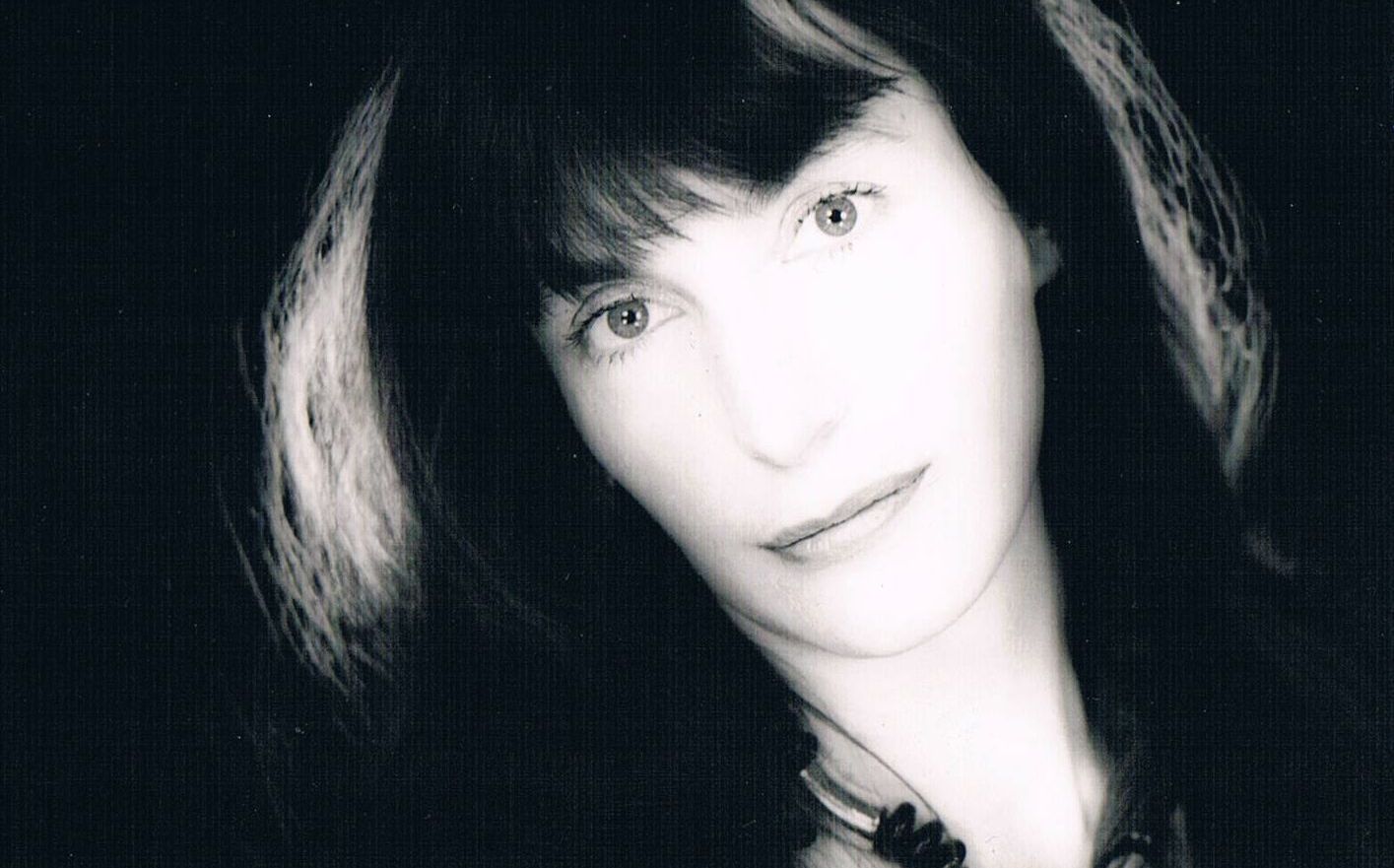 Born as a Libra in communist Poland. Started writing when she was 14, when she was 15 she began studies at Department of Philosophy of the Warsaw University. After the studies she worked as a journalist. Soon she became independent by living out of writing. She finished her first novel at 20 but because of political censorship in these times publishing houses never accepted the book. Still, she published in press and when her books started to be published she became a renowned author by evoking in her readers extreme emotions  from love to hatred.

As she puts it herself: “In my opinion, a writer’s vocation is to be a public person, and writing itself is only a means to achieve this. This means could be entirely different: perhaps fight for religious freedom or dance on a wire”. Critics and writers repeatedly call her “a terrorist of literature” (“She constantly risks making herself unpopular with her writing.”, “She loves lost cases.”, “The only living Polish political writer.”, “Alpinist on a huge dose of dope.”), what is apparently associated with her personality and temperament. As she says it: what really matters to her is absolute independence and inner freedom.

Her Nietzschean motto: “Live dangerously” made her seek friends in various circles. Successfully: in late 70’s and early 80’s she was associated with the milieu of German and French terrorists, but also with front-page politicians. She says: “At least I know well what I write. I know the reality.” In her dangerous life she was attempted to be gained by former communist intelligence of Poland and Democratic Republic of Germany. She contacted people who created recent history, like Regis Debray, associate of Che Guevara, and Klaus Croissant, attorney of Baader-Meinhoff Group. In What Augustus Taught Me, a novel which made a scandal in Poland, she described two characters, similar to two of main Solidarity front men. Later on  just like the characters of the book, which may be attributed to the prophetic character of writing  one of them started in presidential elections, and the other became the head of the most powerful media concerns in Poland. Her intellectual and artistic independence won her numerous awards (among others Maksymilian Kolbe  Reinhold Schneider Peace Award in 1976, underground Solidarity awards in the 80’s, award of Committee for Independent Culture and many others), but also hindered her presence in Polish contemporary literature. Novels which would never be accepted by the censorship (like Agitka published in 1987 by underground publishing house Margines, Śmierć Ognia in 1986 by Rytm), were published under a pseudonym in underground publishing houses, which involved risk of severe consequences by the communist power. With the fall of communist regime, she has taken interest in less political issues like money, fear of unemployment, moral issues, “sex, art, and death”, and recently, the milieu of press people as in List otwarty do Królowej Wiktorii (Open Letter to Queen Victoria).

Anna Bojarska has published the following novels: Lakier (Varnish), Agitka (Leaflet), Czego nauczyl mnie August (What Augustus Taught Me), List otwarty do królowej Wiktorii (Open letter to Queen Victoria) and Ja (Me), her other books are biographic essays Pięć śmierci (Five deaths) and Urban and a critical literary essay Madonna Pekaesów, czyli wyznania czytelnika-samicy (Madonna of Country Busses or Confessions of a Female Reader). She has written along with her sister Siostry B. Podwójna autobiografia: rodzinne krwawe jatki w dialogach, faksach i mailach. (B. sisters. Double biography. Bloody Family Slaughter in Dialogues, Facsimiles and Mails.). She is also an author of numerous screenplays, among others, for Modrzejewska a TV series based on life of a great Polish actress famed through her career in America. Her screenplay for a TV series about Stefan Zeromski, Polish political writer, is currently in production. She is also a playwright: Andrzej Wajda, Polish director and an Oscar Award winner has staged her Lekcja polskiego (A Lesson of Polish), where main role was played by Tadeusz £omnicki, voted one of the greatest Polish actors of 20th century. First staging of this play, telling the story of the last years of life of Tadeusz Kosciuszko, Polish national hero, took place during the changes of 1988 and 1989 and became a significant event not only of an artistic, but also of a political character.

Some of her published novels:

Varnish (Lakier), Wydawnictwo Literackie, 1979: Intelligentsia and totalitarianism, Third Reich and communism. Three encounters of a German and a Pole and two choices how to face life. Devotion or “ivory tower”? 10,000 copies sold.

Agitka (Leaflet), Margines, 1987; Wydawnictwo Literackie, 1990: A spy novel. Anticommunism in the East and red terrorism in the West. The plots are joined in the person of 30 year old Pole who, paradoxically, is appealed by the contemporary left. He enters the dark world of left wing agents and provocations and finds himself in the perplexed international conspiracy. 15,000 official copies, earlier published by underground publishing houses.

Businessman idzie do raju (Businessman Goes To Paradise), unpublished yet. A vivid depiction of business giants, Ford, Carnegie, Bata, a fascinating portrayal of their psyche and reconstruction of their vision of world. Relations between them and the “dwarves”, workers and consumers manipulated by them.

Czego nauczył mnie August (What Augustus Taught Me), BGW, 1995: A story  of „sorcerer’s apprentice” in the times of decline and fall of communism. Friendship of two politicians, a master and his pupil. Pupil surpasses his master, manipulates instead of being manipulated, friendship turns into hatred, all this is entangled into love, affairs, and marriages. Times change and we should follow, is the motto of the story. The novel was a scandal in Poland as two major politicians recognised the characters of the novel to be themselves. The book was attempted not to be published, the author libelled. (“The lady who aims to be Polish Flaubert”  from one of MP’s comments).What is even more amusing, the persons indignant with alleged portrayal in the book actually conformed to the main plot: one of them started in presidential elections, another, using his political contacts made a fortune and built a media emporium. “Actually, I should have become a fortune-teller, it’s more profitable. Something always results from something else, there is a logic in it all and future can be foreseen. I really know what I am writing about!”

Her play La tekknique de la jungle or Meeting, written in French, about Toulouse-Lautrec, crippled genius, and his cousin, also a painter, also crippled (she became deaf, died of tuberculosis), author of a famous diary, published after her death. Their unhappy love affairs, their friendship and complicity (in reality they never knew each other). Subtitle: „art, flesh and death”. You can see more and see photos from the Polish staging of this play here. This play been produced in Polish translation for Polish Television Theatre in 1995.

List otwarty do królowej Wiktorii (Open Letter to Queen Victoria), WAB, 2000: An amusing story of a girl working in women press who hates her job and about  her Machiavellian and anarchist attempts to disentangle herself from this situation, so that her life made sense “like life used in Victorian times”. The title suggests that there is a double meaning to it. There is, the author is a scheming writer and Open Letter to Queen Victoria is a comparison of Poland to Victorian England where children were pulling trays in coalmines and people going out for an evening walk had to take care not to be murdered for two pounds and donated for a medical academy as an research item. Toska Misztal, the hero, is a highbrow who cannot cope with capitalism reality. She hates her job in one of the women magazines where all co-workers are snobs, simpletons or undereducated and where the only aim of reputable editors is to lower the level of the magazine in order to gain new readers. The journalist hates life in Poland, where there is no place for people with manners and education, and where you have to elbow your way through life. The book sells extremely well and additional edition has just been introduced on the market.

Ja (Me), Wydawnictwo Literackie, 1984, WAB, 2003: The author has discovered that various human features can be represented as separate characters, fighting for power in an overcrowded flat. There is a journalist for hire to perform ambiguous tasks, a housewife dreaming of getting married, a writer and a girl representing pure biologism, a successful politician and a female terrorist ready to change the world by force, a protestant priest and an abused neurotic 12 year old girl, a mad man struck by reading of Wuthering Heights and fabulous singer, Janis Joplin, in the novel alive and famous but unhappy and unloved. “But who am I for myself”, asks Bojarska after Malraux, “Some absolute affirmation, lunatic affirmation, an intensity greater than anything apart of it. For others, I am what I do.”

Poor Oscar or twice about love – Only few writers have been devoted so many books as Wilde. A fact that another one has appeared should not make an impression but Poor Oscar is not yet another phony biography but, as the title suggests it, a love story of the great writer and a young English lord, Alfred Douglas. It is a story told twice: by bitter, growing old Lord Alfred Douglas and by immeasurably humiliated Oscar. Both of the men have common memories of impulsive, mad, daring love and of its disastrous end. Poor Oscar, a story of a love affair  which is still sometimes referred to as “the greatest erotic scandal of all times”, is watched from two points of view: of the man who loved, and of the man who was loved. Those stories  Wilde’s, a genial artist and Douglas’, his beloved and the man who destroyed him  show how inclination to possess and to make one person fit another’s schemes remains unchanged. Yet, the call for freedom in sexual sphere is mere (or, perhaps, sheer) sign of respect for individual features of a human being, and it is cowardice which is true disgrace, “the scandal of all times”.

excerpt 1 from the book Poor Oscar :

excerpt 2 from the book Poor Oscar:

Anna Bojarska passed away in 2019.
All rights to her work were inherited by her son, Max Bojarski.